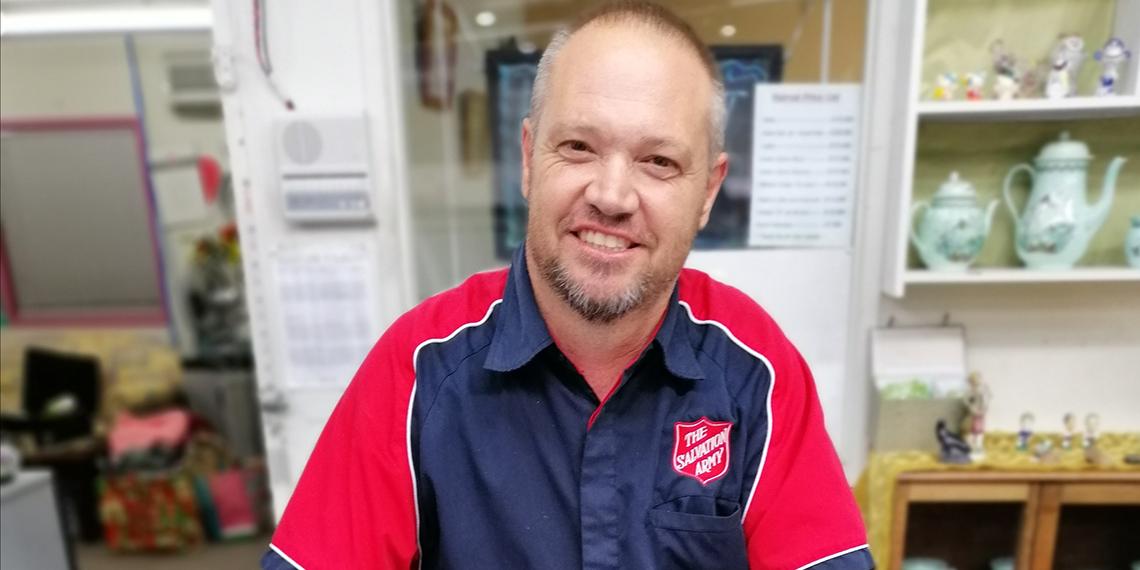 When Steven Bates first walked into a Salvation Army Family Store in 2011, he was a broken man. Recently divorced and severely depressed, he never imagined that this would be the place he’d find hope and healing.

Steven has one of those faces that just lights up when he smiles. His broad grin and hearty laugh are infectious, but they haven’t always come easy. For most of his life, Steven has been plagued by anxiety and depression. He knows what it’s like to be at rock bottom, completely alone and afraid.

While Steven attended church as a child with his parents in Glen Innes, it would be many years before he met Jesus personally. As a teenager, he became a spiritual seeker, searching to ease the growing anxiety within him—exploring Hare Krishna and meditation throughout his teens.

When he left school, Steven tried a few jobs until he settled into what would become his career path for the next 20 years—video duplication and distribution. Making TV commercials and New Zealand films were all part of the daily grind for a video tape operator.

Throughout the 1980s, though, Steven began to experience panic attacks, descending into depression in the early 1990s. Still searching for inner peace, he tried hypnotism and pursued other religions, including Buddism. ‘But nothing helped. Nothing touched the anxiety.’

Steven lived in the UK for a few years, before meeting Rachel, whom he married in 1992. A son, Jacob, arrived ten years later. But Steven’s anxiety continued to intensify with mortgage payments, the challenges of parenting, and working in an industry that was changing rapidly with the arrival of computers and new technology.

These were darks days for Steven, who suffered in a brooding silence—self-medicating with alcohol, which only exaserbated the anxiety and depression. ‘I was irritable and short-tempered. I would get angry and be so sharp with Rachel,’ he recalls.

Like many anxiety sufferers, Steven was plagued by low self-esteem. ‘I hated myself so I took it out on her,’ Steven confesses. ‘I refused to go to counselling, thinking I could fix myself.’ But refusing help only pushed his wife further away.

One day, it culminated in a massive panic attack—so severe that Steven had to be hospitalised. ‘I thought I was having a heart attack, I really thought that I was dying,’ recalls Steven.

This was the crossroads that resulted in Steven leaving his job, working instead from home for the next 18 months. But the situation took its toll on Rachel as well, and by the end of the year, she had left—taking Jacob with her.

‘We’d been married 17 years, but I don’t blame her. She deserved better. If I’d been more open to getting help, our marriage might have been saved,’ reflects Steven.

Devastated and overwhelmed with grief, he couldn’t see a future. ‘I was lost. And the employment outlook was grim, given the industry I was trained for was pretty much gone,’ he says.

A light in the darkness

But there was some light. During their marriage, Rachel and Steven had a friend called Micheil who was a Christian. ‘I’d never met a “born again” Christian before. I used to think he was a  bit odd actually! But he was an exceptional friend—he loved me with the love of Christ,’ reflects Steven.

Micheil gave Steven and Rachel a Bible, praying they would both come to Christ one day. ‘When Rachel and I split, for some reason, I took that Bible with me.’

One night Steven was lying awake in bed. ‘My life started playing over in my head like a movie re-run, with all my sin illuminated. Somehow I knew this wasn’t my doing, but that someone else was revealing this to me. So I asked: “Is this you God?” And somehow I knew it was, and that I wasn’t alone. For the first time in months I drifted off into a peaceful sleep.’

The next day, Steven went digging through boxes until he found the Bible. ‘I opened it to the verse in Proverbs 12:22 (KJV) that says, “Anxiety in the heart of man leads to depression”.
I burst into tears realising that there was finally someone who understood! My search for answers was over. I said “yes” to God.

‘For the next few months I was high on God and everyone knew it! My old friends thought I’d gone mad but they could see the change in me—it was a radical contrast.’

Steven joined a local church and began praying about a job. In September 2010, he saw The Salvation Army on the news following the first Christchurch earthquake. ‘Now there’s something I could do! I’ll join up and go help people,’ he thought.

So he sought out the nearest Salvation Army, which happened to be the Ti Rakau Family Store in Auckland. ‘I had this picture in my mind of going gung-ho in Jesus mode! But the reality, of course, was quite different,’ laughs Steven. God has a great sense of humour, and in the end, it was his seemingly redundant skills that were in demand: ‘I got stuck out the back of the Family Store doing electrical testing on TVs and DVDs—the industry I had run from,’ Steven explains with a grin.

But this was a key part of the journey because underlying the joy of finding Jesus, there was still pain and grief that needed to be processed. ‘I would come into the store just to get out of the house and out of my own head,’ explains Steven. The manager at the time, Aaron Stephen, listened and cared. ‘The Family Store staff and other volunteers became my new family. It was a place of healing for me,’ Steven affirms.

This led to paid casual work, then a full-time position. Four years after signing up to volunteer, Steven took on the role of Senior Retail Assistant (second in command).

‘I love working at the Family Store, because I get to rub shoulders with people who wouldn’t normally go near a church. In the store, you can talk one-to-one, and build friendships with regular customers. I’m just a brother who can listen and care. That’s what was done for me, so this is what I do for others.’

Steven clearly has a pastor’s heart and is drawn to people who are broken. ‘I try and point people to Jesus and the journey he offers. It’s about taking steps forward and then some back for sure, but it’s also about learning to accept yourself and others. The world doesn’t get it, and tells us to walk away and dismiss difficult people, but that’s not who God calls us to be.’

Steven’s now an adherent member of the East City Salvation Army in Howick. ‘Being part of a faith community is good and helpful. But going home and being on my own is hard. I’m so grateful that Jesus is a real person! He makes all the difference and his presence provides comfort. God’s promises help me to stop hiding and fight my way up again out of the pit. I couldn’t imagine being at rock bottom again without him,’ Steven explains.

Still on the journey

At the end of 2016, Steven was offered the position of manager. ‘This was a really big step-up for me. I was still struggling with my mental health, so taking on this responsibilty was a huge challenge.

‘My depression was still there and sometimes I was low, other times a bit hyper. My doctor wanted me to try antidepressants, but I kept refusing, certain that I could get through on my own. Classic male stoicism.’

This year marks 10 years since Steven’s divorce. Again, he’s facing some of the same challenges—needing to move house and some big changes at work. This time, though, Steven has God, his job at the Family Store, and a straight-talking Christian counsellor.

A hard but timely word from his counsellor influenced Steven’s decision to finally try medication to help with his anxiety and depression. Steven admits there’s still a stigma about taking medication—especially for men. And, at times, he’s been part of that stigma—choosing the path of stubborness and stoicism instead.

But a big rugby hero of Steven’s in the 1980s was Sir John Kirwan. In his book All Blacks Don’t Cry, JK admits to a breakdown and taking medication to get through. His example helped Steven understand that being kind to yourself is not weakness. ‘Lately I’ve been asking myself “What would JK do?” I would never advise someone to hide and not get support—including medication—yet this is what I have done for so long.’

Now, Steven is experiencing an unprecedented reduction in anxiety, and is so grateful to God. ‘People take insulin for diabeties, so it’s a no-brainer now for me to just thank God for medical neurological advances and the provision of medication.’

Steven is about to move out of management and back into the ‘2IC’ role at the Botany Family Store, which is a move he feels good about. ‘I can focus on people and leave the business management side of it to someone else. I want to be available to help people when they’re struggling and be a positive presence.’

Steven is also keen to keep moving forward as a father to his son Jacob. ‘When Rachel and I separated, I just knew I couldn’t muck this up—I couldn’t lose my son. For years I overcompensated and did all the classic part-time dad stuff, like taking him to the movies and the zoo when he stayed with me.

‘But over the years I’ve become a much better father, and Jacob and I are close. He’s actually a great source of encouragement for me. Teens these days have access to information about anxiety and depression that we never had. Jacob plays sport and says it’s good for his mental health.

No one talked like this when I was young, we were in the dark about mental health. I thank God this has changed.’

For Steven, rest and self-care are increasingly important. ‘It’s paramount that we honour God and rest. We live in a world that would have us going 24/7 if we let it. For me, Sabbath rest is a major part of wellness.

‘And don’t be stoic—Christians get depressed, it’s a fact.

But with God by your side, and the miracle of modern medicine, there is hope.’

For Steven, Easter is a special time to reflect on his recovery: ‘If you’re struggling and searching for peace, Jesus really is the answer. Our true problems are all heart problems—we all have sin in our hearts. But Jesus died for those sins—they can be washed away by the blood he shed on the cross,’ says Steven. ‘This is the path to peace, self acceptance and healing.’