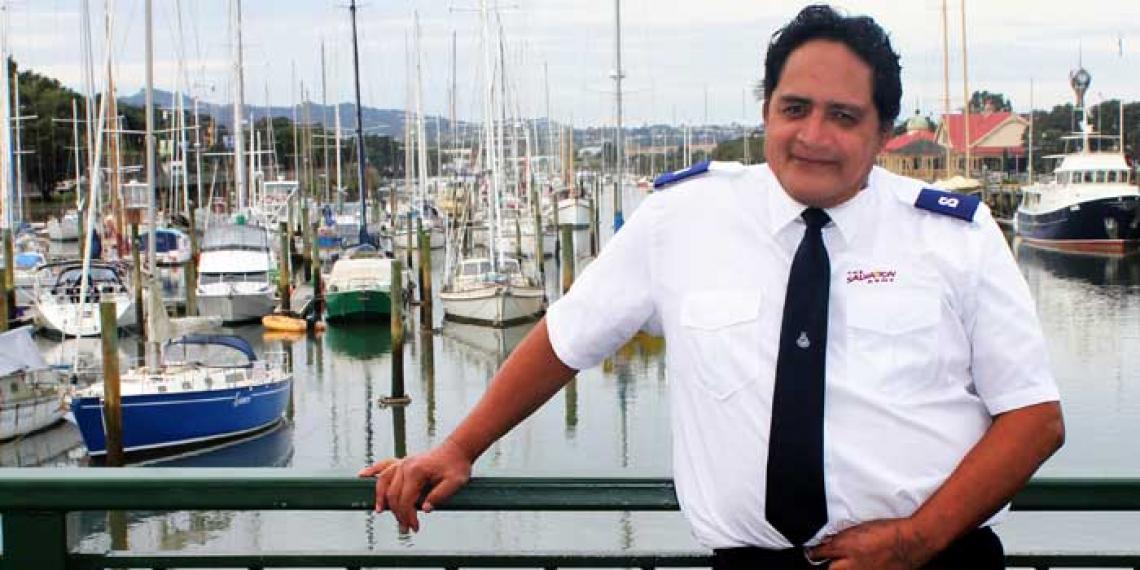 I’ll never forget the afternoon, about five years ago now, that a uniformed Salvation Army man walked through my gate.

I didn’t know it then, but that day my life was about to change in ways I could never have imagined.

‘Brave’ would be the way I would describe this man. I was angry—angry with him for being there, angry with my life, angry with the world. My fists were clenched, but still he was standing there before my ugly attitude, talking to my darkness.

His courage that day saw the beginning of my long and difficult and continuing journey toward God and toward ‘life’ for me and my whanau.

We began showing up at the Salvation Army church and recovery church meetings, though some would have wondered why. For months I came and just sat without opening my mouth to sing, to pray, to worship, or take part in any way. I heard the Scriptures and the teachings, but it never got inside me. I never let it. I recognised that others at the meetings were connected to something and to each other, but I didn’t know how to get it, and I doubted I could be part of it. If God was there, I had no idea how to reach out to him.

The seeds of hope

Finally, a long time later at a beach at Onerahi, I prayed ‘the sinner’s prayer’, asking forgiveness for all the wrongs I had done in my life. I felt huge shame about who I had become and how I was living. At the same time, I felt powerless to change this. I broke down, tears falling, speaking out my miserable life and wondering how I could ever be forgiven. After, it was like a huge weight lifted from me. I had at least connected with God. I knew he was there. I felt alive.

But then it was back to life. I went to church on Sundays—I experienced God and the warmth of those around me—but still, the rest of the week, I continued to live the way I always had. The only way I knew. With anger, hatred, pain, bitterness, violence and life’s reality often blurred by alcohol.

But for the first time in my life I wanted a different life. I wanted to change. I wanted things to change for me and my kids, and I felt some small hope inside that they could.

One of my first big challenges was to break away from my alcohol addiction. I knew if I didn’t, I would lose my kids. By this time I was alone, caring for my six girls (aged 18 months to 11 years). I had to step up for them.

I enrolled in The Salvation Army Bridge Programme for addiction treatment. That year was probably the hardest time I have ever been through. You would think stopping drinking would make life easier, clearer, but it didn’t.

For my whole life, whenever there was boredom, stress or problems, alcohol would blur them away. Now I had to face life, every day. Every problem from the past and the present, I had to face it and try to work it out—no escaping into the haze of alcohol.

I struggled, blaming everyone but myself. I struggled, often loud and angry on the outside, but on the inside I was frightened and with no answers.

Breaking free from my childhood

Caring for my six girls was a huge challenge. Up to that point, I’d hardly been a father to them, let alone a mother as well. I muddled along. I made so many mistakes. I had little idea how to parent, never having had any positive role models. I had to unlearn everything that was in me from my childhood and relearn a new way.

Often, I wanted to quit—quit my kids, quit the church, quit God. It all seemed so hard; too hard on many days. But with help and support from the church family and other special people that God had put in my life, I hung on. I don’t know what kept me going some days but there were people who believed in me—people who told me God loved me and could change me and help me become the man he made me to be.

I wanted that desperately now, so I hung on.

My girls were now going to school regularly, had routine and more security in their lives, and they were never hungry. I watched them gradually change. There was laughter in our home. They were doing well at school, making friends, and there was a light in their eyes that kept me on my new road.

Despite these positive changes in our lives, I always struggled with unforgiveness. There was still a darkness in me as I couldn’t seem to forgive (for very long) those that had wronged me. And I couldn’t forgive myself for what I had done, and especially for the many ways I had failed my kids.

A major breakthrough came when four church people surrounded me, placing their hands on me and praying for me and with me for several hours in a time of cleansing*. I had a list of all the bad things in life on a page in front of me: things like hatred and lying, rape, stealing and violence. I had to put a red line across the things I had done. I turned the page red!

During the prayers I had to own up to God and ask his forgiveness.

I remember tears and shaking, but also this warmth and light flowing in me as well. After this experience I felt a new calm and peace and

I could see more clearly the way I needed to go to get my life on track. I began to really let God into me, and slowly I began to change.

The years I was in prison and living on the fringes of gangs had taught me to trust no one. I had become very isolated and found it difficult even to talk to others and have normal relationships. When people told me to trust God, they were asking the impossible—I didn’t know how to trust on any level. I didn’t even trust myself. But gradually I was beginning to open up to God and to others in a way I never had before.

Last year I became a uniformed soldier (member) in The Salvation Army, which was the most significant moment of my life. I feel a belonging and acceptance that is a new experience for me.

These days I sing and take part in church life, and I am honoured and proud to be involved. I am continuing to grow in building healthy relationships and amaze myself sometimes when I find the confidence and right words to talk to new people. Before, I could hardly look anyone in the eyes.

Recently, I opened my house to a home group that meets there most weeks. This too was a big step for me; I didn’t want to do it at the beginning. I guess I was still ashamed of my life and who I was, and I thought I wasn’t a good enough person. But now I realise no one sees my mess or shabby furniture or even judges me, and I look forward to having them visit.

I have begun playing drums in the recovery church band—badly sometimes—but being part of this group gives me such a buzz and feeling of belonging that I am practising hard to get better and better. I am also preparing to go into prisons one day soon to help there. I am hoping I can use my journey and experiences to help and encourage others who are in the same dark place I was in, only a few years ago.

Although things are still difficult some days and there are problems from my past that still seem to haunt and follow me, I can now face my problems one by one with God at my side. I have no desire for alcohol anymore and I have not had a drink for nearly two years. I have learned that the way to solve problems is not with my fists or with angry words pouring from my mouth. I know now for the first time in my life what love looks and feels like, how to give love, and how to receive love. I am learning to be the best dad I can be to my kids.

I have been and am still amazed at what God has done in my life. I deserved nothing from him, but he has done miracles for me and my whanau. And I know that this is just the beginning—in some ways I feel like my life is starting again and I have another chance. Together, me and my whanau now have a hope and a future, just as God has promised.

*Mike’s ‘BreakFree’ cleansing was provided by Victorious Ministry through Christ, an international and non-denominational group equipping the Body of Christ to carry out the healing and deliverance ministry of Jesus. For more info, go to  www.vmtc.org.nz.

For info on The Salvation Army Addiction Service (including the Bridge Programme and Oasis Centres for Problem Gambling), go to  www.salvationarmy.org.nz/addictions.