Welcome to the Family Store 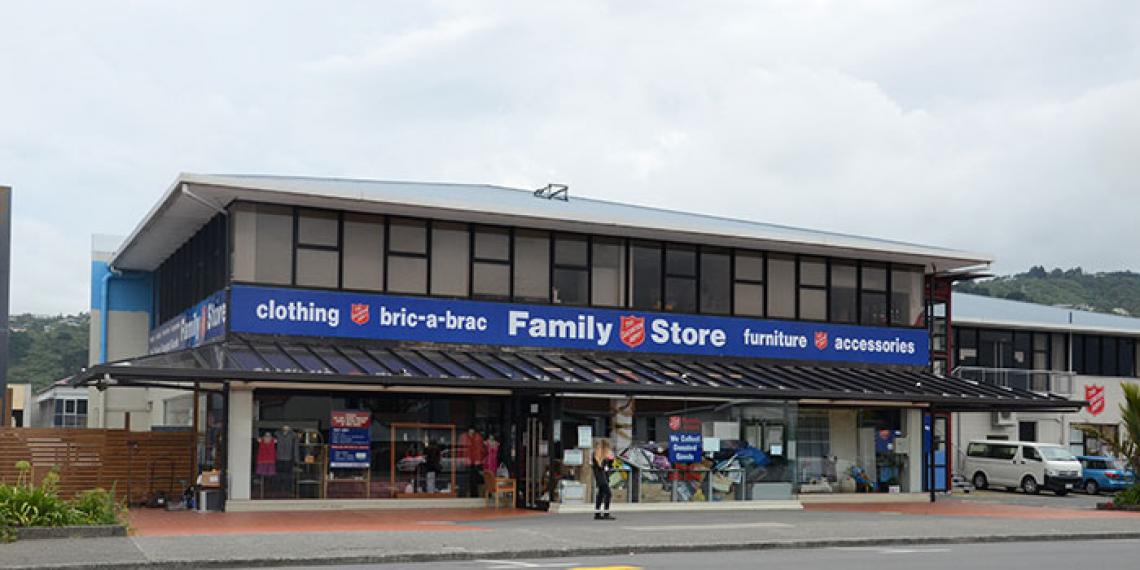 The Salvation Army runs 125 Family Stores across New Zealand, selling donated second-hand goods. They are among the most well-known and visible parts of the Army’s work.

While at first glance, Family Stores are a simple second-hand store concept, they serve the Army’s mission in more ways than just helping families on tight budgets get access to good quality, second-hand items for cheaper prices. Family Stores also raise money to help fund other Salvation Army projects, they serve as a public face of the Army as it connects with the community, and even help people get a second chance into employment.

The Salvation Army’s Territorial Secretary for Business Administration, Lieut-Colonel Lynette Hutson, says the fundraising side of Family Stores is a big part of the Army’s work. In the 2013/14 financial year, Family Stores raised about $11.2 million to support the Army’s mission. But the stores are not ‘for profit’; they’re for mission, Lynette says. This money mostly goes back into Army corps (churches), helping them operate as community centres by funding community outreach programmes such as emergency relief, or children, youth and schools work. Without Family Stores, many of those programmes would not exist, she says.

But beyond the day-to-day business of sales, Family Stores also have an important social role by providing second chances for people. Many stores take in people doing community service hours and volunteers who have been through Salvation Army programmes such as drug and alcohol rehabilitation.

Southern Division Family Store consultant Robyn Tsukigawa, who oversees 41 stores across the South Island, says caring for and developing people is one of the most important roles of a Family Store. One store in the South Island can have up to 40 community service workers on their books, helping fill the roster and making sure work gets done.

People on community service have to go through strict checks to make sure they are low-risk, but they provide a valuable service. ‘One lady could not speak any English, but she was the hardest worker. She polished that store from top to toe,’ says Robyn. ‘Although they’re there as a “punishment”, we value what they do. They come from all walks of life, but they’re special people. Some might be inclined to think they’re low lives, but they’re just people who made a mistake.’

Being able to offer people that second chance is something Family Stores are able to do that other businesses can’t, and it is hugely empowering for people, Lynette says. People get a chance to do most roles in the store and to up-skill. They get the feeling of giving back and putting something positive into their community, and it helps people who have been unemployed get into the structure and rhythm of working again, and gives them trust. ‘When I worked in Auckland, I remember the chaplain of the Auckland addictions programme saying to me he had placed 63 people from the programme into volunteering at the Family Store and then back into employment,’ she says.

Robyn says the Southern and Central Division Family Stores also offer staff retail training and qualifications through Service IQ (formerly the Retail Institute), which handles training for mainstream retail shops across the country. This has helped some volunteers get regular retail jobs.

The stores can also help other sectors of society, with one Family Store manager in the South Island taking on staff with special needs, including one with Down Syndrome, Robyn says. This is something the community has taken to heart, seeing the caring nature of the store, and it’s good to see the development of these people as well, she says.

Caring for and developing staff—including volunteers—is an important task, both to keep shops running well and because of the Army’s underlying Christian ethos. In the South Island alone, there are more than 700 Family Store volunteers. Many come for the social aspect, Robyn says, and keeping a store vibrant, with people feeling appreciated, helps encourage that.

Family Stores are one of the most visible parts of the Army’s work and often someone’s first experience of The Salvation Army, Robyn says. Many people come in to the stores asking about food parcels or looking for other assistance, particularly around Christmas and during winter. They are referred to Community Ministries for specialised help.

In the Southern Division, Family Stores are asked to have a space on the shop counter with information about their nearest corps (church) and the wider Army, including information about services from Mainly Music to food banks, Robyn says. Staff are also encouraged to wear a uniform with a Red Shield logo to remind customers they represent the Army. ‘A lot of people don’t realise we’re part of the church; they think it’s just a shop,’ says Robyn. Having material on hand about the wider Salvation Army, along with invitations to corps events, helps customers learn more about the Army and sends a message that they’re welcome to become part of it.

Looking after customers and being part of the community is very important, says Robyn, and so she asks Southern stores to have a space such as a book corner where customers can sit and read, and to offer people tea and coffee. ‘Often, I will go into a shop and see that same person in the book corner who’s there every day—and that’s great.’

Family Stores also help with emergency relief for people in urgent need, including anything from furniture and household supplies to clothes. These clients are referred to the stores by Community Ministries staff. They range from those coming out of addictions or debt situations who have nothing, to people who have lost everything in fires.

Lynette says the donations of goods to Family Stores can be crucial for people in dire need. ‘For some people, the gap between surviving and not surviving is very fine. If someone’s in a seasonal job, their job comes to an end and then the fridge breaks down, suddenly they’re in a crisis.’

Working at a Family Store requires dealing with a variety of roles and challenges. It’s not easy work. One of the biggest challenges for staff is saying no when people want to donate dirty, soiled or damaged goods. Another comes from people dumping rubbish outside stores. Each year, stores spend an average of almost $5000 each on rubbish removal, including unwanted donations and rubbish dumped outside stores. However, Robyn says this is a challenge all charity shops face.

It can be a tricky balance for stores, between the need to provide budget items and raising money to help the most vulnerable. Higher cost items at stores help raise money, but they can be seen as pricing people out of the market.

Robyn says the many people who donate higher-cost items are doing it to help The Salvation Army, and it is appropriate to sell a few items for what they’re worth as long as everyone is catered for.

While stores still sell the majority of items at a low cost, selling the best, top-quality items for a higher price is fair and good stewardship of what has been donated, Lynette says. ‘We’re very privileged to receive items of value and I think it’s appropriate to sell those at the price they’re worth to generate funds, because the more funds we generate the more work we can do in the community.’