What will you do for me? | The Salvation Army
Skip to main content

Home / Church Community / Articles / What will you do for me?

What will you do for me? 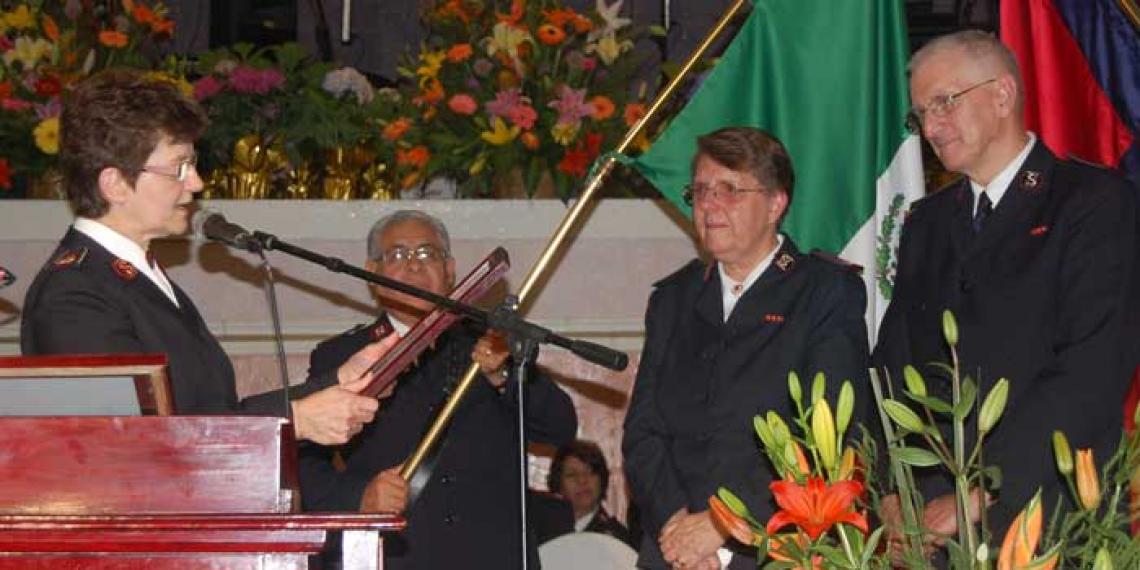 We were appointed territorial leaders in México from 1 July 2009.

Since then, we’ve had the privilege of visiting all 48 Salvation Army corps (churches), nine outposts (church plants), 19 children’s homes and various other community social service centres and programmes.

These activities are overseen by the country’s 147 active officers (ministers), nine of whom were commissioned during our recent 75th anniversary congress, which was led by General Linda Bond. There are eight second-year cadets, with 14 first-year cadets entering training in August.

The majority of México’s population would be classed as poor to extremely poor. Unlike New Zealand, there is no government funding if people are out of work, invalid or solo parents. You only survive if you do some kind of work—even cleaning car windscreens, juggling, or selling toys, drinks, sweets, fruit, flowers or food at traffic lights, as many do. Entire families live on the streets and look after themselves in this way.

The biggest challenge for México as a country is to put an end to the violence and deaths caused by conflicting drug gangs fighting over lucrative drug and human trafficking routes into the United States through México. Other challenges include the poverty, corruption, kidnapping, extortion, human trafficking, torture, mutilation and murder of opponents of gangs, including mayors of cities, reporters, politicians, judiciary, police, uncooperative immigrants and any citizen standing in their way.

Over 50,000 people have been killed in the past six years. High numbers of well-armed police patrols traverse the streets of every town and city—24/7. The people are fearful. Armed security guards are on duty at schools as children arrive and leave to prevent kidnapping or gang members trying to sign up youth to join them in their evil ways. Despite this dreadful situation, God is at work in the lives of the Méxican people, who pray for peace and security.

Over 5000 people accepted Jesus as Saviour through the ministry of The Salvation Army in México last year. We praise God for our zealous evangelical officers, soldiers, youth and children that every day share Jesus through their words and actions.

God at work in La Ponderosa

México is a vast and beautiful country with its snow-covered volcanic mountains, lush farmland, high-altitude mountainous terrain and dry barren deserts providing a contrast to its east and west tropical coasts with their turquoise water and white sandy beaches. During our time here, we’ve travelled from north to south and east to west. I’d like to share with you a little about some of the Army’s work in a city called Durango, in central north-western México.

‘And what will you do for me?’ the young girl seems to ask with the look in her eyes and her attitude.

She lives with her family in a large squatter area called La Ponderosa, part of the desert city of Durango. This community of ‘housing’ is made from bits of wood or any potential shelter material. Some walls are just plastic sheeting or even blankets. Winter in the desert areas is freezing cold, and in summer, it is boiling hot. There is no running water and the dirt streets make for a dry and dusty environment. Toilets are just holes in the ground. Many hundreds of families struggle to survive or even keep themselves clean. The people, especially the children, reflect the poorness of their family situation by their physical appearance, and education is an unaffordable luxury for many.

We visited this squatter community in November last year, accompanied by Durango’s Salvation Army officers, Lieutenants Itzel and Raúl Rodriguez. Over the past four years, this couple has been ‘building God’s Kingdom’ by sharing the love of Jesus with so many needy people of all ages.

Lieutenant Raúl, driving his old donated pick-up van and vigorously blowing the horn, quickly rallied a crowd of dirty children and numerous mangy dogs that together ran alongside the vehicle until it stopped. Women came out of their houses with containers of all sizes, for they knew the Army had come on one of its regular visits to help them. The back of the pick-up was loaded with leftover fruit and vegetables and other food donated by a large supermarket.

The children lined up for a banana each and their mothers formed another line. My husband and Lieutenant Raúl stood on the back of the pick-up truck spreading out the food so the women could make their choice, while at the same time watching that the women at the front of the line did not take too much so others would get none. The food was soon all gone. The mothers were also given the opportunity to rummage through donated clothing and shoes to find some items that might fit their family. All the children were given a toy and an item of stationery.

I spoke to some of the women who told me their life survival was a continual crisis. One lady said she had lived in La Ponderosa for 11 years without water on site. Imagine that! They had to cross a busy highway to carry buckets of water to their houses to use for every need. At any time they could be removed from the land if the owner decided to develop it. Their homes would be destroyed and they would be homeless. What a nightmare situation! They certainly could not buy the land.

Some of these people had started coming to Sunday worship at The Salvation Army. One lady testified that she loved to come to the Army because, though poor, she was able to meet her Christian friends, including those from middle-class families. She felt no class distinction because she was loved as she was. We were impressed with the number of men present. They said they were inspired by the joy of the congregation. They had found peace and joy and their family life had changed dramatically.

We heard personal testimonies about how others had come to the Army. More importantly, we heard them speak of changes that had taken place in their lives since they accepted the Lord. They spoke enthusiastically of attending The Salvation Army because it was an ‘active’ church, helping people in need. Many said they loved worshipping at the Army, which was so different to the Roman Catholic Church or other church traditions they’d known.

Teenagers told us they had hated going to church before, but now they told their parents when was time to leave for the Army! These teenagers’ testimonies were up-to-date and personal—many of them shed tears as they told their stories. We were truly blessed and inspired by all we saw and heard as we met together in the rented Army hall.

Thank you for your support

The continuation of Salvation Army work in México is only possible through the grant the territory receives from The Salvation Army’s international Self Denial fund. Our officers and Salvationists give what they can, but many in the congregations are poor. Being a predominantly Roman Catholic country also makes it difficult to find donors willing to support another Christian church.

For these reasons, we are so grateful for the Self Denial Appeal support that comes from The Salvation Army in other countries—including the New Zealand, Fiji and Tonga Territory. When you give generously to the Self Denial Appeal you are giving opportunities to servants of God in other countries to minister his love and grace to people who, like the young girl in Durango, wonder: ‘What will you do for me?’

On 30 June, we retired from being active officers after 42 years and five months of service in the New Zealand, Fiji and Tonga Territory, the Hong Kong Command, the Singapore, Malaysia and Myanmar Territory, Vietnam, the Taiwan Region, and finally (over the past three years) as territorial leaders in México. The blessings and opportunities of working in so many different countries and cultures have far outweighed the challenges and any dangers or health risks.

We remain immensely grateful for strong support from Salvationists back home in all the countries where we’ve served—both by supporting the Self Denial Appeal and funding specific projects. From your generosity we have been able to make a difference in the lives of many thousands of people overseas during the past 20 years. As we retire, we stand firmly on God’s promise in Genesis 28:15 that daily reminds us, ‘I am with you and will watch over you wherever you go’