Is the world changing before our eyes? | The Salvation Army
Skip to main content

Home / Church Community / Articles / Is the world changing before our eyes? 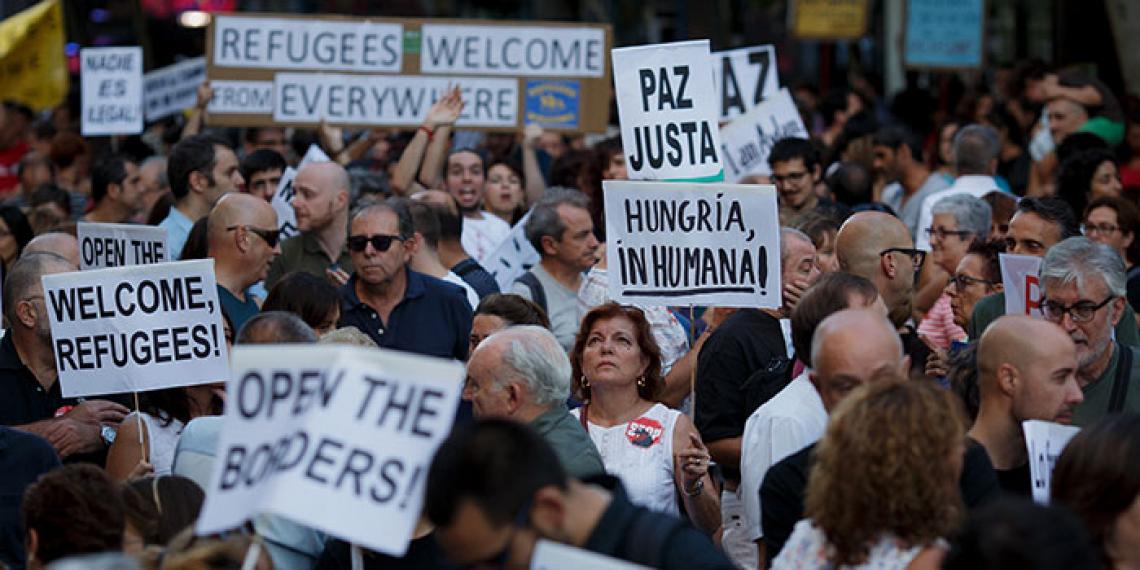 Some weeks ago, I was asked to write this opinion piece for War Cry. At the time, the article would have dealt with the end of the Millennium Development Goals and the mixed results of efforts over the past 15 years to ending poverty in the world. We were looking forward to the world leaders’ summit and the launch of the new Sustainable Development Goals era at the United Nations General Assembly, with the exciting prospect of finally ridding the world of extreme poverty in the next 15 years.

The world seemed fairly predictable at the time, but so much has changed in the past three months that it seems as though the world really is changing before our eyes.

I work for World Vision, where we are engaged in bringing long-term development through child sponsorship programmes and—with the assistance of ordinary New Zealanders—helping communities in developing countries lift themselves out of extreme poverty and have the chance for a decent life. When disasters come along, those same New Zealand supporters are so willing to donate to help people in need in Vanuatu, Nepal and the Syrian refugee crisis, to name the latest campaigns we have run. Prior to my time with World Vision, I worked with The Salvation Army’s development and emergency programmes across 100 countries worldwide. The breadth of these two organisations and their footprint in making a positive change across the world is pretty impressive. For the past 30 years this has been my life, and so when I’m asked the question ‘is the world changing?’ it is answered with some knowledge of how development aid is done.

So, what is changing? In the past, refugees poured out of conflicts and generally settled in refugee camps in neighbouring countries. There are 60 million refugees worldwide—the equivalent of nearly 14 New Zealands according to the UNHCR, the UN agency tasked with looking after them. UNHCR and development organisations have assisted those communities to achieve some level of meagre existence in those places. Most refugee camps are tough, dangerous places; nothing like the amazing care that New Zealand gives to refugees. But even so, in some places, generations of displaced people eke out an existence of permanent displacement.

Similarly, 15 years ago when the Millennium Development Goals were set, the pattern was that the poor stayed in their countries and development agencies and governments developed programmes to improve the conditions there. Progress was uneven, but since 1990 to 2014 we have lowered the daily death rate of under-fives worldwide from a staggering 35,000 per day in 1990 to a still totally unacceptable level of 16,000.* This is hard-won progress we must celebrate, yet there is still a long way to go to reach zero.

Fifteen years ago, when the Millennium Development Goals were set (with much fanfare), the world’s leaders agreed to expend 0.7 per cent of their GDP on overseas development aid. This was calculated to be sufficient to rid the world of extreme poverty. In 2014, the global average, according to the OECD, was 0.29 per cent. We promised the poor the cheque was in the mail, but in the end we welched on the deal.

Then came the European summer of 2015, when something fundamentally changed. At the same time, World Vision had launched a campaign called ‘The Forgotten Millions’ to raise awareness of the extreme conditions for the Syria and Iraqi refugees. Then we saw something unprecedented: a vast movement of people leaving the Middle East and crossing over to Europe. Suddenly the paradigm changed. No longer can we stay in our affluent homelands doing a little bit to satiate the needs of the desperately poor. They are ending up in Europe’s backyard and they can no longer be considered forgotten because they have literally turned up for lunch.

For the past few weeks the conversation over who will receive the refugees has annoyed me. Of course, there is a need to treat people decently—this is a reflection of our humanity. But the deeper, most pertinent question is: how do we deal with the reason for this invasion of the desperate? At the time of writing, the international discussion is finally moving towards dealing with the major source of the present flood of refugees: the Syrian/Iraqi conflict. The answer is to be found at the Security Council with a solution to the Syrian conflict. Here, New Zealand has such a pivotal place to play. We sit on the Security Council and have the chance to be an honest broker to find a solution there. If this deeper solution is found then the issues of the refugees becomes simply a matter of logistics and money.

But this is not the total answer. A significant proportion of the refugee influx into Europe are simply people from the forgotten corners of the world where the development effort hasn’t been sufficient. This is a legacy of 15 years of underinvestment in development and we are paying the price. The poor are no longer ready to wait forever for their homelands to change. If a better life is to be found in Europe, Australia and New Zealand, enough of them will try and some will succeed in making their way to our place.

I would like to ask how sincere world leaders were when they all rolled up to the UN General Assembly and all signed the new Sustainable Development Agenda? Again, they have promised:

But what do these statements mean? What is the definition of ‘determined’? The poor of the world have a right to believe that these statements are evidence of a sober determination to achieve these goals. When our leaders sign us up to these undertakings, the human response should be that our word is our bond and we will do what
we say.

If we fail to carry through with this, I would predict that this summer’s situation in Europe will merely be the first of many similar people movements until people can find a place to live where there is hope for their children. Either we invest in the forgotten places, or we welcome their people to our place.